What’s Next for Memfault 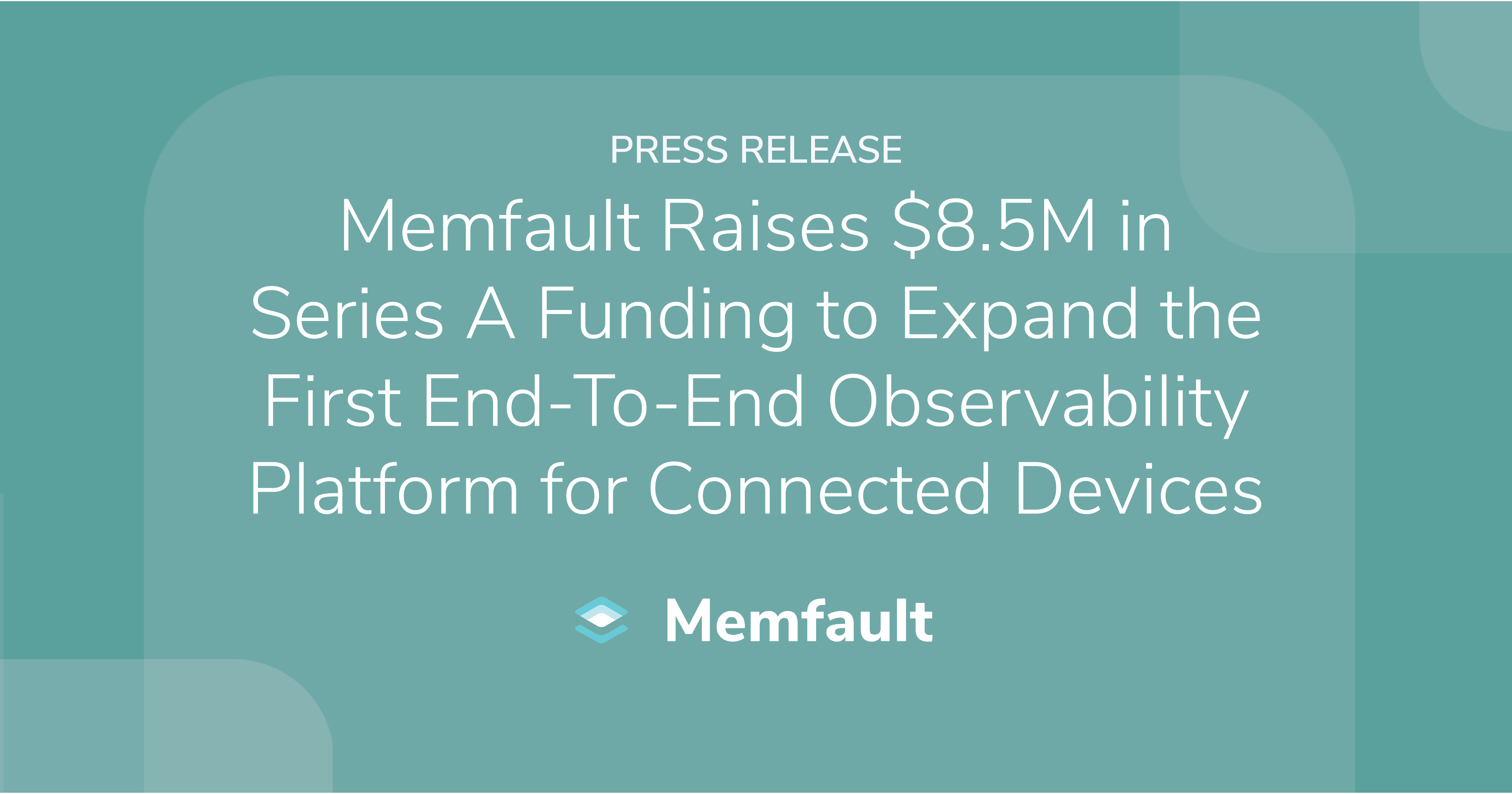 Read more about this announcement on Crunchbase News, Silicon Angle, and VentureBeat

I’m thrilled to announce that Memfault raised US$8.5 million in Series A funding led by Partech Partners, with participation from Uncork Capital, S28 Capital, and some fantastic angel investors. It follows a Seed round raised in 2019. The new funding will enable us to grow our go-to-market and product teams and to accelerate our plans to bring modern DevOps tools to the hardware industry.

Chris and I started our careers at Sun Microsystems, working on the host firmware for SPARC T-series servers. Firmware at Sun moved at the slow pace of hardware development. We shipped new releases no more than once a year and focused most of our efforts on upcoming models.

This all changed when we joined Eric Migicovsky and his team at Pebble – the smartwatch pioneer of Kickstarter fame – in 2013. On the surface, the job was the same: we wrote C code running on a microcontroller, debugged with oscilloscopes and logic analyzers, and reworked the occasional PCB at the soldering station. And yet, it felt completely different. Our device was connected to the internet through the user’s smartphone, and we took advantage of that fact to move fast and iterate quickly. We shipped updates on a bi-weekly cadence, allowed third-party applications to be installed on the device, and implemented complex interactions between smartphone, watch, and cloud.

The pace was exhilarating, but we quickly hit a wall all too familiar to software engineers everywhere: bugs! Every week, thousands of customers reached out to us to complain of Bluetooth connectivity issues, battery life regressions, and unexpected resets. Investigating these bugs was time-consuming: we had to either reproduce issues on our own units, or ask customers to mail their watches back to us so we could crack them open and wire-in some debug probes. Indeed, firmware engineers report debugging as the greatest challenge they face at work[1].

We did not have to look far to find a solution: software teams in Silicon Valley have long relied on a standard set of tools to wrestle with complexity at scale. Inspired by our colleagues on mobile and web engineering teams, we built crash reporting, software delivery, and performance monitoring infrastructure so we could move fast without breaking watches. Using these tools, we were able to detect issues in minutes and get them fixed in hours rather than weeks. Better yet, we could iterate faster than any other company in the industry.

We honed those techniques for years, and successfully brought them with us – Chris and Tyler at Fitbit and I at Oculus. Each time, we saw those tools transform how our colleagues in engineering, operation, and product teams did their work every day.

Since then, the whole industry has shifted to building products that look a lot more like a Pebble watch and a lot less like a Sun T5 server. Emboldened by new generations of microcontrollers that can run circles around old Cray supercomputers and ubiquitous connectivity, engineers have built ever more complicated embedded software. They’ve gone as far as running machine learning models[2] and computer vision algorithms[3] at the edge! This software is getting so complex that products as simple as shoes are running into problems[4].

Rather than continue building tools for ourselves, Chris, Tyler and I founded Memfault in 2019. With the help of some of our ex-colleagues from Pebble, we built the first DevOps platform for connected devices, allowing firmware engineers to build, iterate, and harden products just like software teams have done for years.

Today, Memfault is used by companies like Logitech, Latch, Owlet, Panic, Verkada, and many more, to ship better products, faster.  We provide our customers with best-in-class tools to monitor hardware and firmware performance, remotely investigate issues, and incrementally rollout targeted updates to devices. It has been amazing to watch observability and experimentation change the way these teams are working.

And we’re just getting started. We’re hiring for our product and sales teams and have a long list of products we’re excited to ship in the coming months. Follow us on Twitter or  Sign up to be notified of our upcoming public launch. We’d be thrilled to hear from you, and look forward to helping you build the next generation of IoT devices.